Today the United States Supreme Court denied review of a cert. petition in King v. Murphy, a case challenging New Jersey’s law that protects young people from anti-LGBTQ ‘conversion therapy.’ This is the latest indication from the Supreme Court that the U.S. Constitution does not prohibit states from protecting minors from this discredited practice, building on the precedent of a 2017 action, when the justices denied review of a similar petition challenging California’s ‘conversion therapy’ ban. 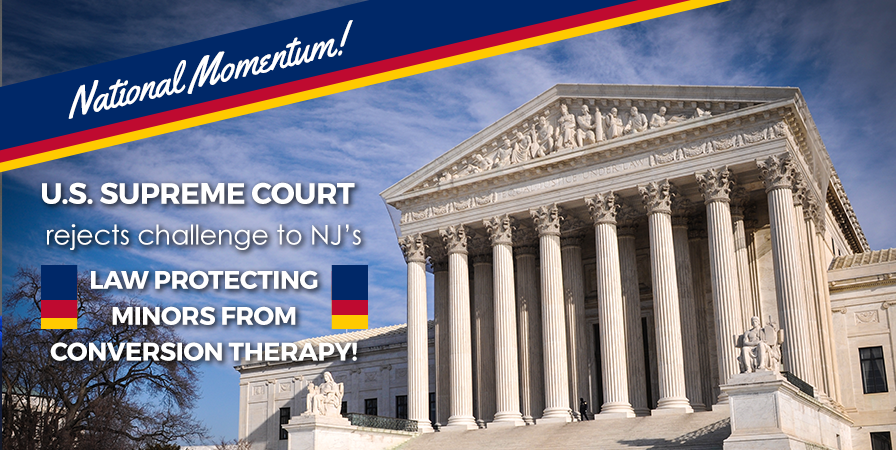 The development comes in a year that has already seen significant momentum in the movement to protect young people from “conversion therapy,” in which licensed mental health professionals purport to change someone’s sexual orientation or gender identity. In recent weeks Massachusetts and Colorado have become states #16 and #17 to outlaw the practice, and last month lawmakers in North Carolina introduced similar legislation for the first time. The NC legislation (HB516/SB426) is supported by Born Perfect NC, a grassroots statewide campaign headed by Equality North Carolina and the Campaign for Southern Equality and backed by clergy, mental health organizations, faith groups, child welfare advocates and civil rights organizations.

“Conversion therapy has been rejected by every leading medical and mental health association, and today the Supreme Court dismissed another challenge to a law prohibiting the practice,” said Kendra R. Johnson, Executive Director of Equality NC. “The courts, lawmakers nationwide, and Republicans and Democrats right here in North Carolina overwhelmingly agree that we must protect our children from ‘conversion therapy.’”

“Proponents of so-called ‘conversion therapy’ are claiming their freedom of speech allows licensed medical providers free rein to subject minors to the discredited practice of conversion therapy. Court after court is rejecting that argument, and today the Supreme Court chose not to review those rulings,” said Allison Scott, Director of Policy and Programs for the Campaign for Southern Equality. “Many other states have recognized that it is their duty to pass life-saving legislation to protect youth, and now it’s time for North Carolina to do the same.”

Based in Asheville, NC, the Campaign for Southern Equality works for full LGBTQ equality across the South. Our work is rooted in commitments to equity in race, gender and class. www.southernequality.org

Born Perfect NC is the campaign to protect young people across North Carolina from "conversion therapy" and send the message that LGBTQ youth should feel safe, supported, and affirmed. www.bornperfectnc.org